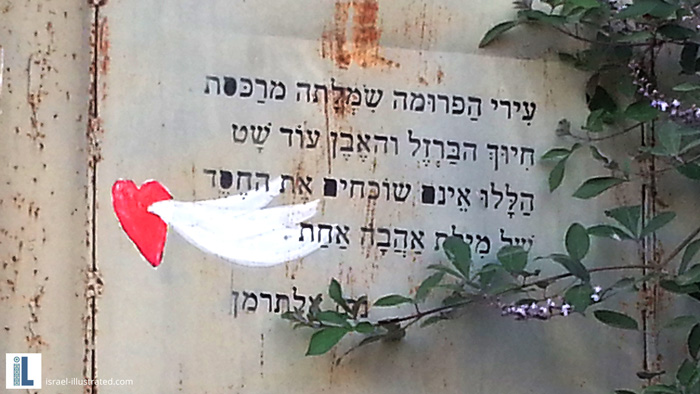 Walking around Tel Aviv I realized one day that most of the graffiti is Text Graffiti.
My people, it seems, feel much more comfortable expressing themselves in words than in pictures.

I had to stop and think about this:
A picture is, after all, worth a thousand words, and it's easily more memorable than text, yet here we are, writing.
I figure there are two parents to the unique Israeli brand of textual graffiti:
One - The Jewish religion with its anti-visual orientation, and
Two - The special ability of the Hebrew language to compress complex ideas into a single word.

A people forbidden of making pictures 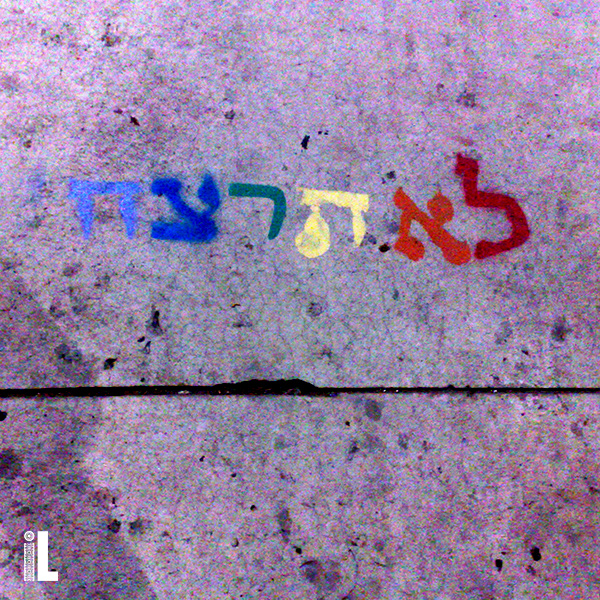 Thou Shalt Not Kill, in the colors of the LGBT flag. This was sprayed on the sidewalks of Tel Aviv after a killing in the youth-gay bar "Bar-Noar".

The Jewish religion strictly forbids making pictures and statues.
This comes from the very core, from the Ten Commandments that Moses downloaded to his tablets from the cloud above Mount Sinai. How he got wifi in the middle of the desert is beyond me ;)

If you read the commandment more carefully you'll see that this only applies to God:
It's a picture or a statue of God that you are forbidden to make.
Why is this relevant to the modern day Hebrew graffiti?

If you've ever studied art you'll know that all the greatest works made before the 20th century are religious in nature.
Commissioned by churches of all kinds they most certainly depict god, or gods, in many forms. From the Acropolis to the Sistine Chapel, the greatest artists drew and sculpted what Jews could not because of their religion.

There is no Jewish Art History.
Not in the usual sense anyway.
I'm a graduate of the Bezalel Academy for Art and Design in Jerusalem.
In my studies there was no Jewish Michelangelo, no Hebrew Temple held high by beautiful stone figures for students to come and copy and learn from.

Jewish art evolved around what was allowed: Natural and geometric ornaments.
The art we have stems from Judaica - illumination of religious texts, and silver and gold decorations of religious artifacts.

The written word became our main form of expression.

The amazing compression power of the Hebrew language 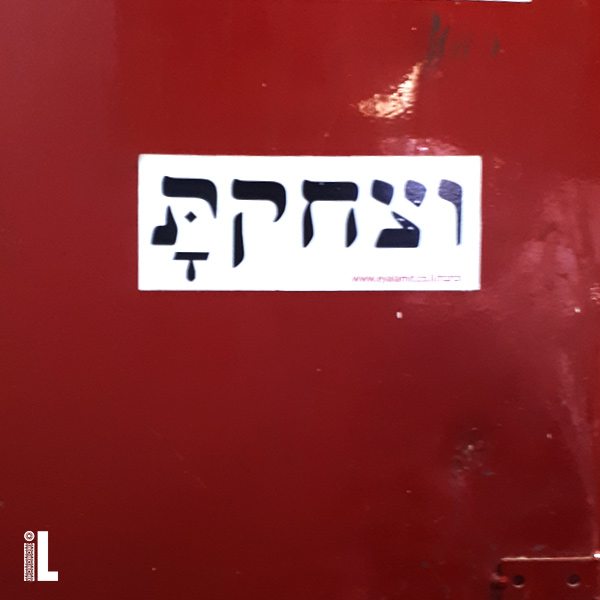 וצחקת "And you shall laugh" Sticker in Hebrew.

The Hebrew language can compress ideas that need a whole sentence in English into a single word.

This wonderful sticker here, for example.
It says: "va-tsa-ha-kta" וצחקת.
It translates more or less as:

"And you shall laugh"

It's so good! It tickles the verbal mind so effectively you just have to smile when you see it :-)
This form of verb is very old, it's like a biblical command. It sounds like it might have been the Eleventh Commandment - "And You Shall Laugh!"

All in a single word.
"Tshok" means laughter.
"Vatsahakta" is an imperative form, it's a "Tsi-vuy", an instruction form that we wrap around the verb. You can do this with any verb.

The font is the right choice too- a "Stam" font, like the handwritten script used for bibles and holy texts.
The last finishing touch is the Nikud on the last letter (Right to left, yes? :)
It illuminates the text, making sure you read it right, with the pronounced "A" sound at the end, and playing strongly on the Ancient Hebrew cord.

Is so good natured. I love this one.

I've taken these pictures in Tel Aviv over the span of about a decade.
They were sprayed or pasted on the walls, in main streets and in hidden alleyways.
Some are sprayed on the concrete pavements of the boulevards, which means they're short lived, because the city cleans them periodically.

As you'll see, Hebrew fonts are very simple, very readable, and more often than not, visually boring. It's the content and context that makes them interesting:

Israeli Culture in the Text-Graffiti Mirror 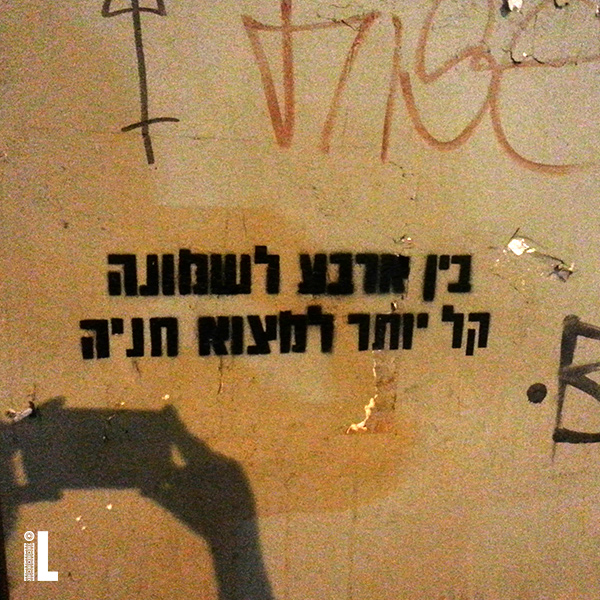 A sarcastic remark on the greatest woe of life in Tel Aviv: Parking.

There's no parking in this city. Especially now with the light railway construction going on.

"Between four and eight it's easier to find parking (space)" 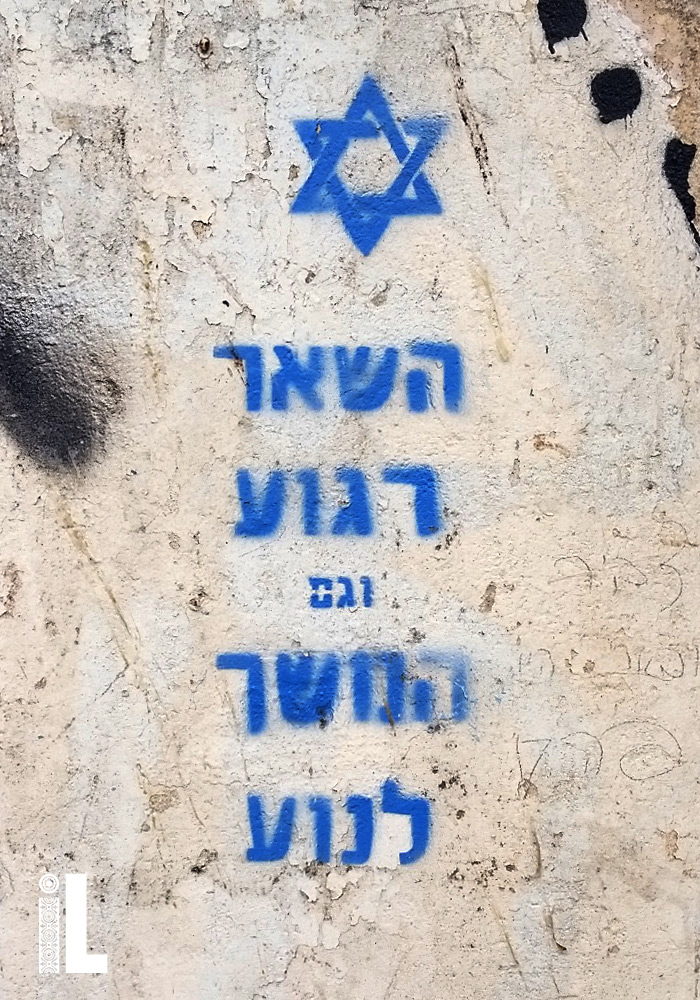 The Hebrew version.
The "Keep Moving" here is in a semi-military form of language.

There's no proper translation for "Gam".
It's one of those Hebrew words that don't exist in English. In this context it simply means "Also"
It's the ultimate additive verb. 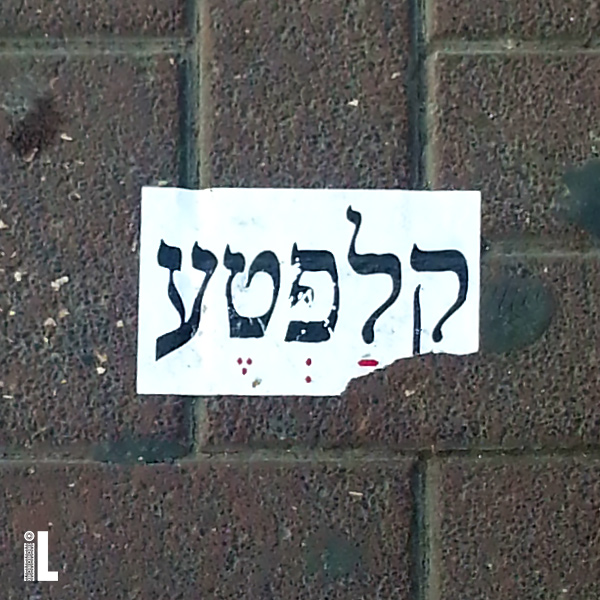 This one simply says "Klafte".

It's Yiddish, for a nasty woman. In English this sticker might say "Bitch".
It is peeling off the Acershtien bricks that cover the streets of Israel.

There's a music band by that name - this might very well be a publicity stunt.
Otherwise it's not a nice word to say to anyone. 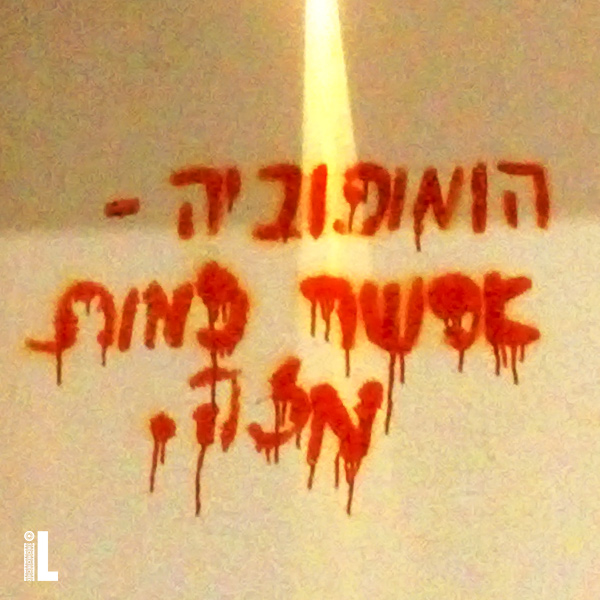 "Homophobia -
You can die from it"
This is what these red dripping letters say.

This Writing and the next picture of the "Thou shalt not kill" graffiti spread in Tel Aviv after the BarNoar shooting in 2009.

A shooter walked into a gay youth center and opened fire, killing two and injuring 11.
This attack at the heart of the most liberal city in Israel sparked large protests all around the country. 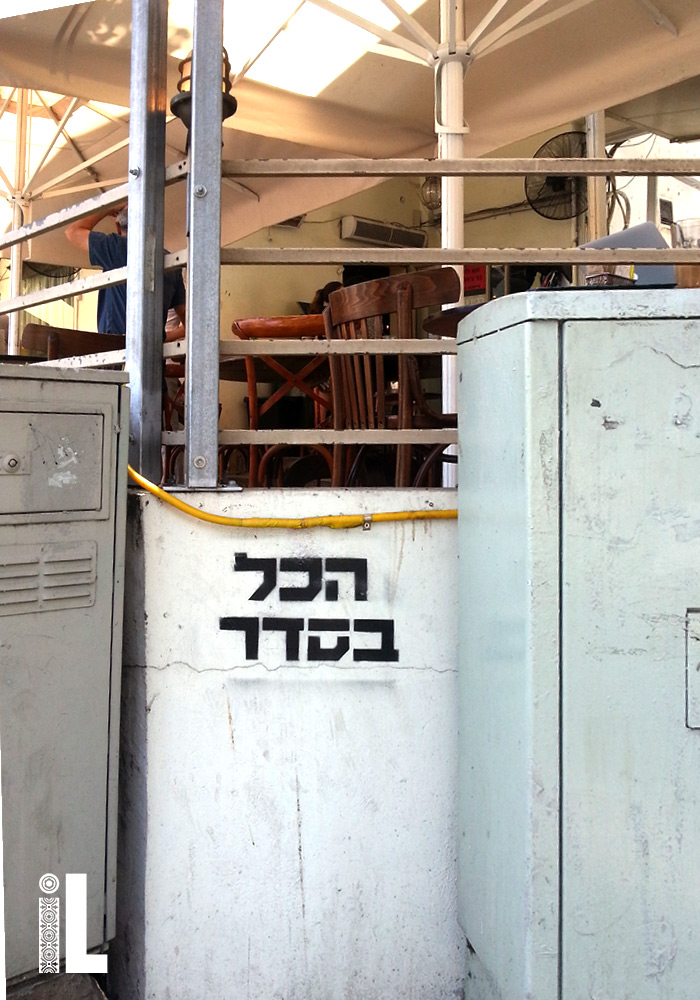 This can be taken in two ways:
Positive - everything's fine, calm down.
Or Negative, in the sarcastic sense.

Israelis are notorious for just winging it and not worrying too much, trusting that everything will work out fine by itself.

"At the Day in which
Wars End"

There's a lot of left wing peace seeking graffiti in Tel Aviv. Probably because it's the heart of the left-wing political movements in Israel.

The next series of pictures are all for peace and coexistence.

I keep waiting to see this kind of talk on the Palestinian side.

A note about the colors of this graffiti:
The Black and Red text is a clear reference to the Peace Now movement (Shalom Achshav). 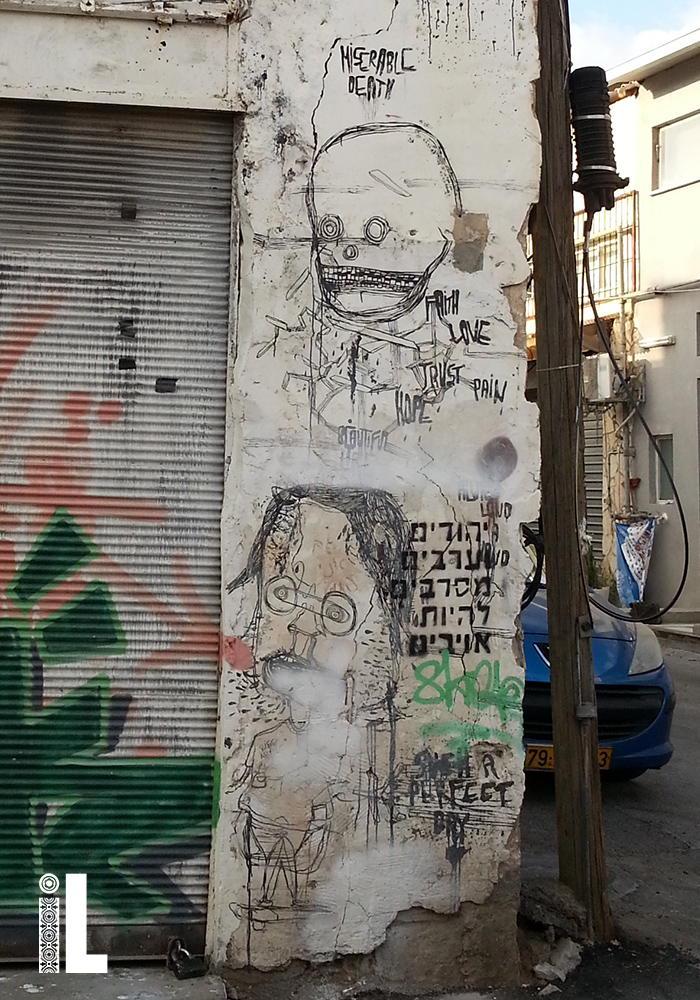 "Jews and Arabs refuse to be enemies". 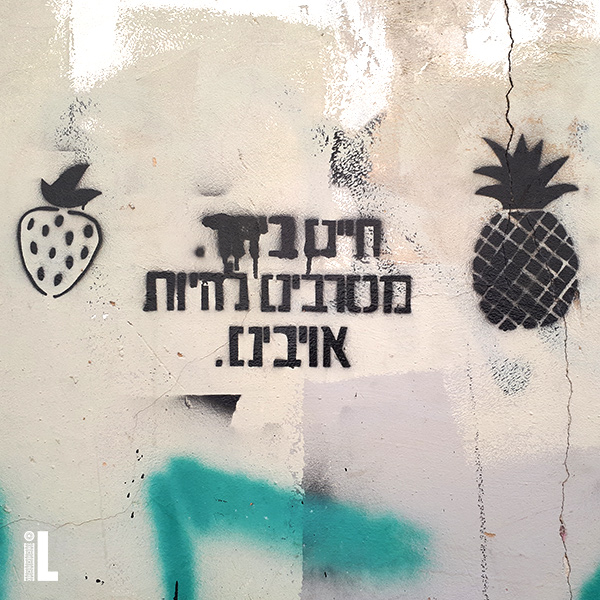 A variation on the previous picture. This one says:

"Living together. Refusing to be enemies".

The pineapple graffiti sure gets around Tel Aviv a lot, I've seen it in many places. 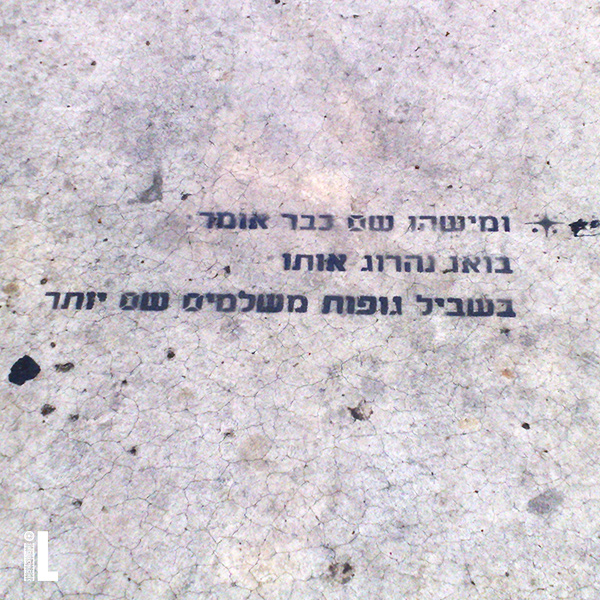 This one is a gut punch.

This graffiti appeared during the later years of negotiations for Gilad Shalit, the Israeli soldier that was captured by Hamas.

The Israeli government did everything they could to avoid a trade deal that would free a thousand terrorists. They stalled, but in the end we paid, swearing this is the last time.

The public pressure on the Israeli government to sign a deal to free Gilad was enormous, for a simple reason:
Every Israeli knows it could have been them in there.
We do not leave our people behind. We didn't in Entebbe, and we don't in Gaza.

"And someone over there (meaning, in Gaza) is saying already
Let's kill him (referring to our captive soldier)
They (the Israelis) pay more for dead bodies there"

The horrifying cynicism of whoever wrote this text makes me sick.
There WAS a larger picture to consider. The Arabs try to use our morality against us. But Israel will always come back for our own, and that is why we are stronger. 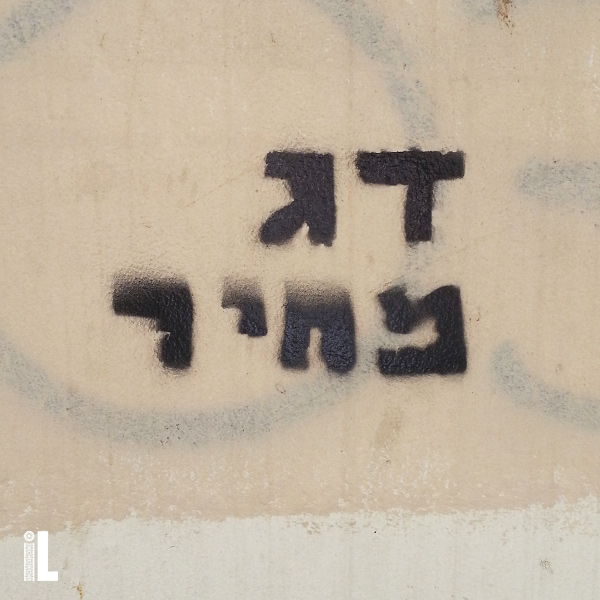 This is making light of a terrible act of terrorism, this time by our side, I'm sad and angry to say.
Humor is just the Jewish way of coping.

It's a pun, a funny distortion of "Tag Mehir".
"Tag Mehir"- meaning "Price Tag" -
is what the extreme Jewish settlers in Judea and Shomron call their revenge actions against muslims.

Usually after the Palestinians kill someone on the Israeli side, the Jewish underground goes and burns something in revenge, and then spray the "Price Tag" graffiti on a mosque or something along those lines.

What really angers me is that Jewish people have sunk to this level.
We don't do that. We Just Don't.

Honestly, I can't imagine what the artist meant by this graffiti.
It could be just an evil pun by some pothead who thought this is funny. And it could be an in-your-face reminder that extremist fanatics can be on our side too.

Either way, this graffiti takes me through an emotional rollercoaster whenever I see it, a funny reminder to something truly bad. 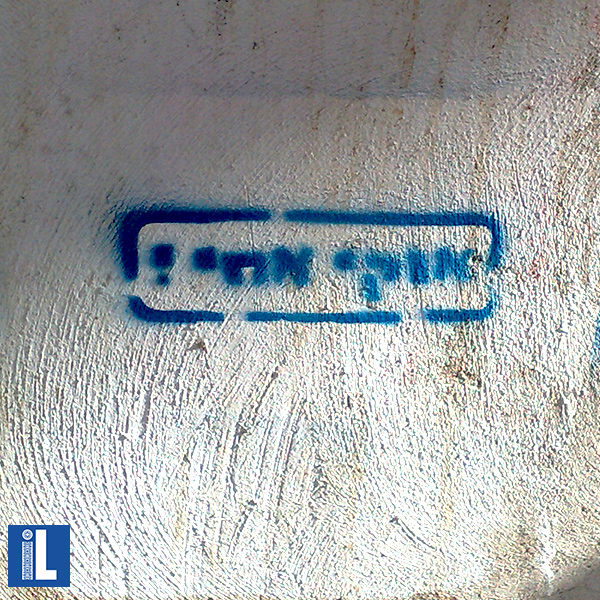 Which is what someone might tell me to calm me down from the previous argument where I got myself all worked up :P

Looks like a good place to close this collection.

Who does make non-textual graffiti in Tel Aviv?

There is also beautiful picture-based graffiti in Tel Aviv, and not surprisingly, most the artists that make them are immigrants, Olim.
It takes people who grew up in a visual culture to bring visual expression to the holy land.
Just give us a Millennium or so of secular Tel Avivian existence; I'm we'll catch up :-) 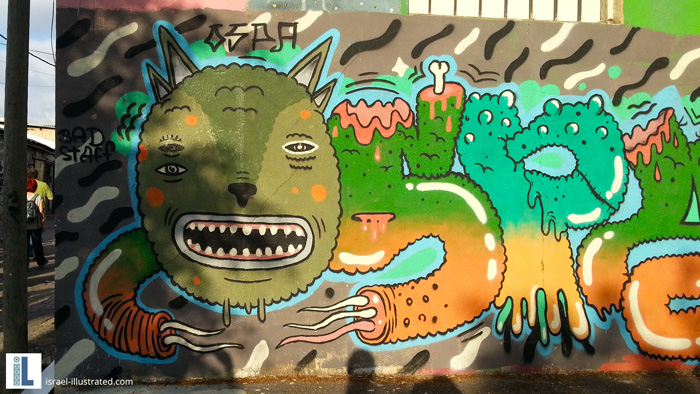 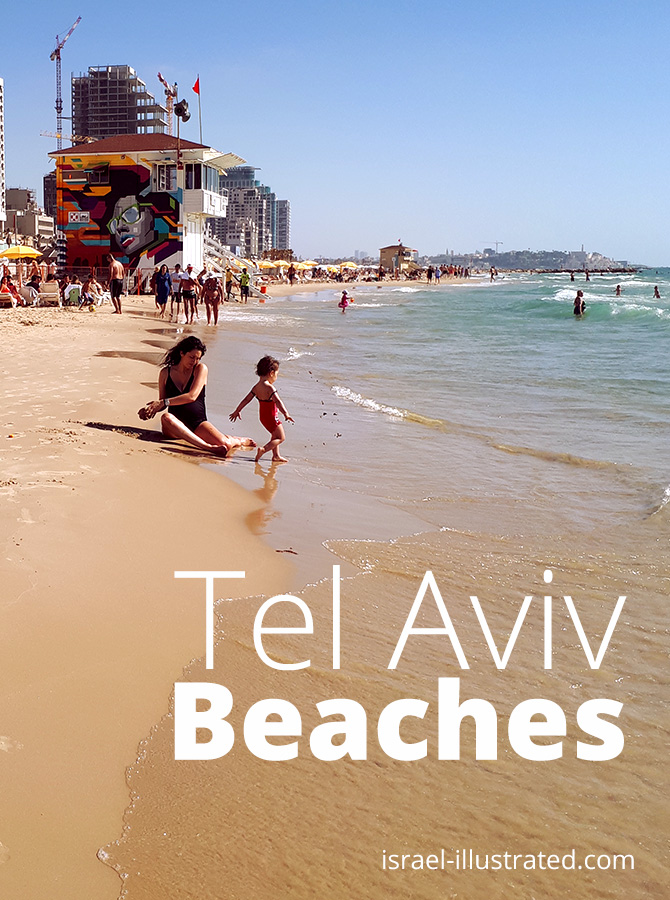 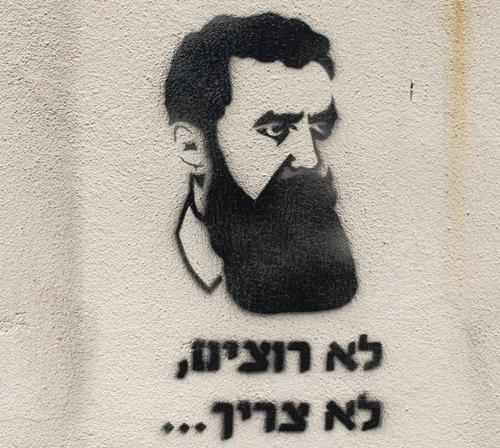 Tel Aviv Street Art
Political, Textual and with a lot to say

The Israeli Flag:
Design and Politics

Alternative methods of getting around in Tel Aviv

Cafe kiosks in Tel Aviv - where startups are born

The Negev Desert Economics of Stone-Throwing