For the longest time the question was, is there really such a thing?

Israeli food is the sum of 2000 years in exile, combined with middle-eastern food, hot weather, water shortage and Kosher restrictions.

As it turns out, it's very good for you!

The famous Mediterranean Diet is now officially the best thing you can eat. This is according to a series of studies published in "The New England Journal of Medicine". 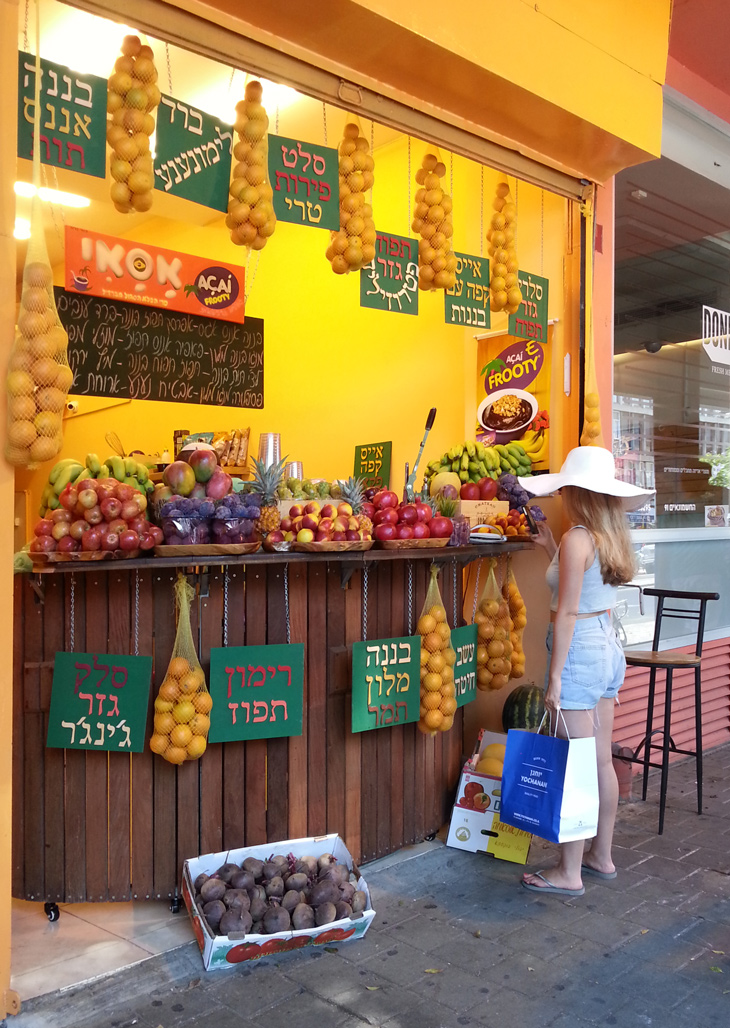 Get your vitamin C at the nearest juice stand :-)

So what do we eat in Israel? 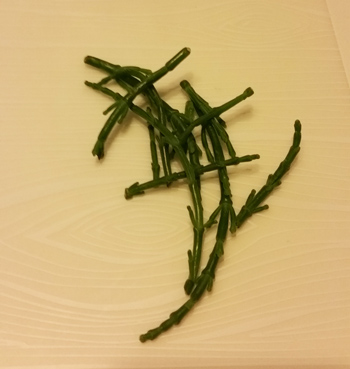 Salicornia - grown on salty water, this plastic looking plant is the latest addition to the Israeli salad. 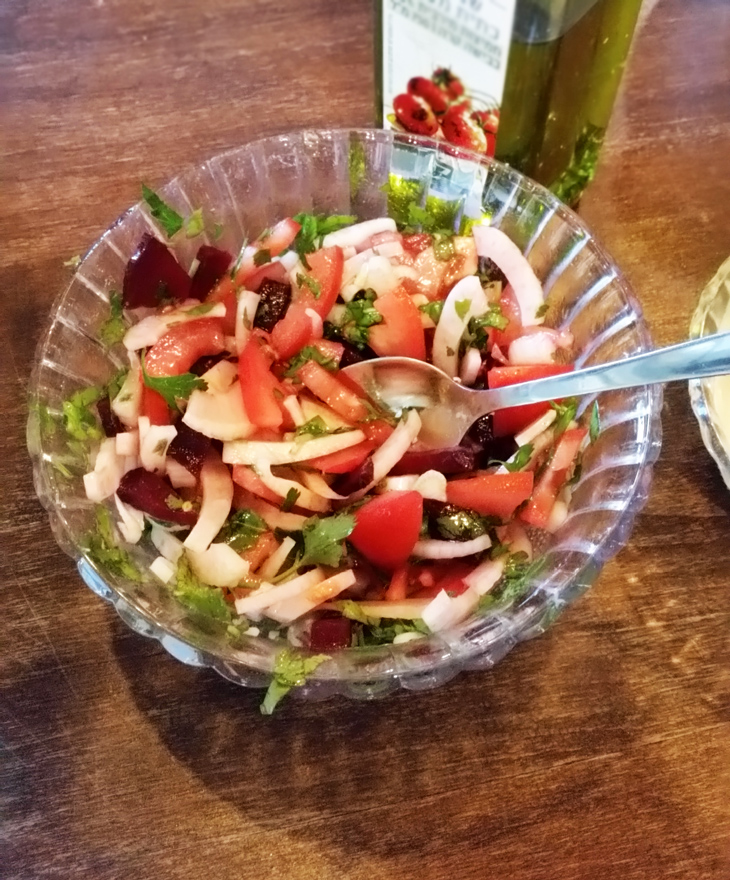 Lots of vegetables. There's always a fresh salad on the table.

Great coffee, befitting the shores of the Mediterranean, and also pita bread, falafel, orange juice and cherry tomatoes, all of which make the ultimate "Israeli Breakfast".

There are "Ma'achaley Edot", meaning ethnic food. Where in the Gola (diaspora) did your family come from? That is what you eat at home.

My family, for example, spent the last two millennia in Spain and Eastern Europe, so we love Schnitzel with noodles and Borscht soup.

Come to think of it, Schnitzel with noodles is the favorite lunch of all Israeli kids, whatever their "Eda" (ethnicity).

If your family had come from Iraq, you might eat Ku-be and Iraqi Pita. There's Russian food - to be found in huge supermarkets, where the Russian immigrants bring the good stuff. The not-kosher good stuff.

There's Tripolitai food, Moroccan, Greek, Ethiopian, Argentinean - all the places Jewish people lived in before returning to the promised land. The latest addition is the from the French, who have pushed Tel-Avivian cuisine to new heights. 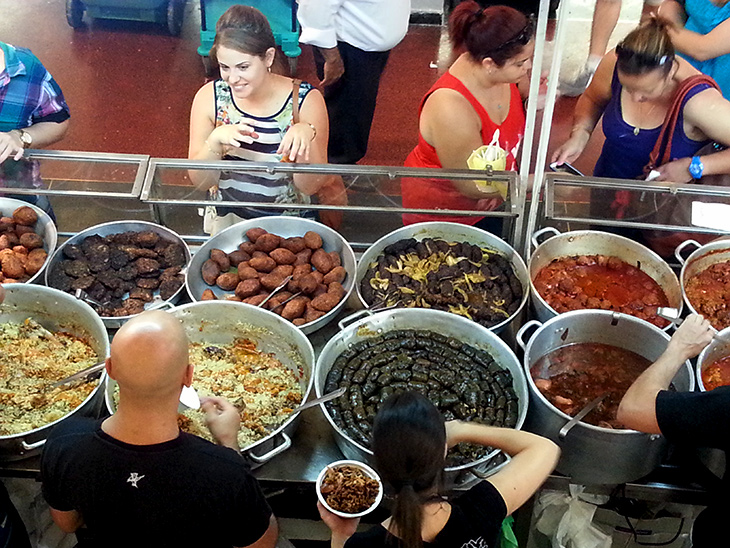 To round it up, there's also all the food Israelis have adopted:

MacDonald's and American delis, Thai, Chinese, Japanese. Israel is at the top of the list for Sushi restaurants per capita.

We also love Indian Food. The traditional post-army trip for released IDF soldiers is to India or Thailand. When they come back from the moon rave party in Goa Beach they turn vegan. Now every restaurant in Israel offers vegan items on the menu, and a wonderful Ginger-Lemon-Honey brew. 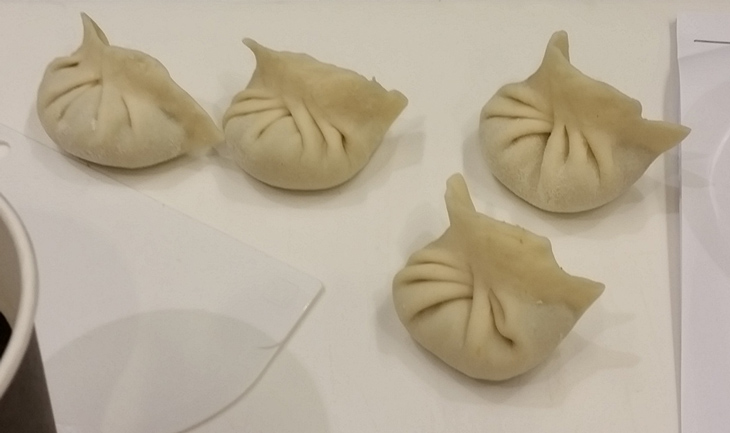 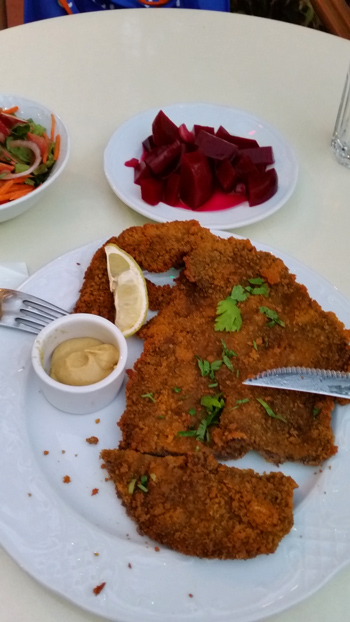 This is the home of the Jewish people, yes?

Kosher food is the norm, at home or in public, whether you think of it or not.

If you want butter in your mashed potatoes, or a cheese-burger, you will have to actively look for it, and you won't always find one.
Army food is strictly Kosher, to the point where sandwiches from home are "an issue".
It's not just the army. Pretty much all public kitchens are kosher. The work place cafeteria, catering services, and hotels. This is why the breakfast on Shabbat is a pale shadow of what you get on weekdays. Welcome to the world of hot-plate cooking.

If I sound bitter here, it's because I have a problem with the State looking into my plate.
In Israel, the church and state (ok, synagogue and state) are NOT separated. This is a Jewish State, and so is the food. (And public transportation and other things...)

Ok back to the fun part:

You will never go hungry here.

When you visit someone, the first question will be "Coffee?" and the second - "Have you eaten?"
If we gather - there will be food. Doesn't matter what the gathering is for - happy, sad, business - there WILL be food.
Israeli television is one big cooking show, just flip the channels, someone is always cooking something.

You can try your own hand in this:
Here is a really easy one, for a corner stone dish in Israeli cuisine:

Labane Cheese (pronounced "La-Ba-Ne")
It's a slightly sour, low fat cheese spread, and it's made from a single ingredient - yogurt!
Here's my mom's recipe for a home-made version. 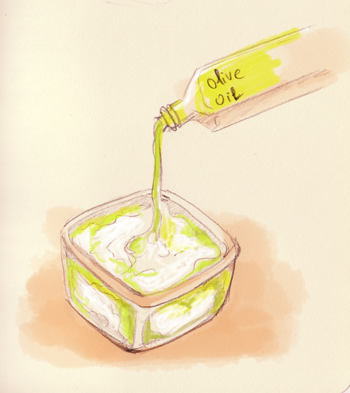 How to make Labane Cheese 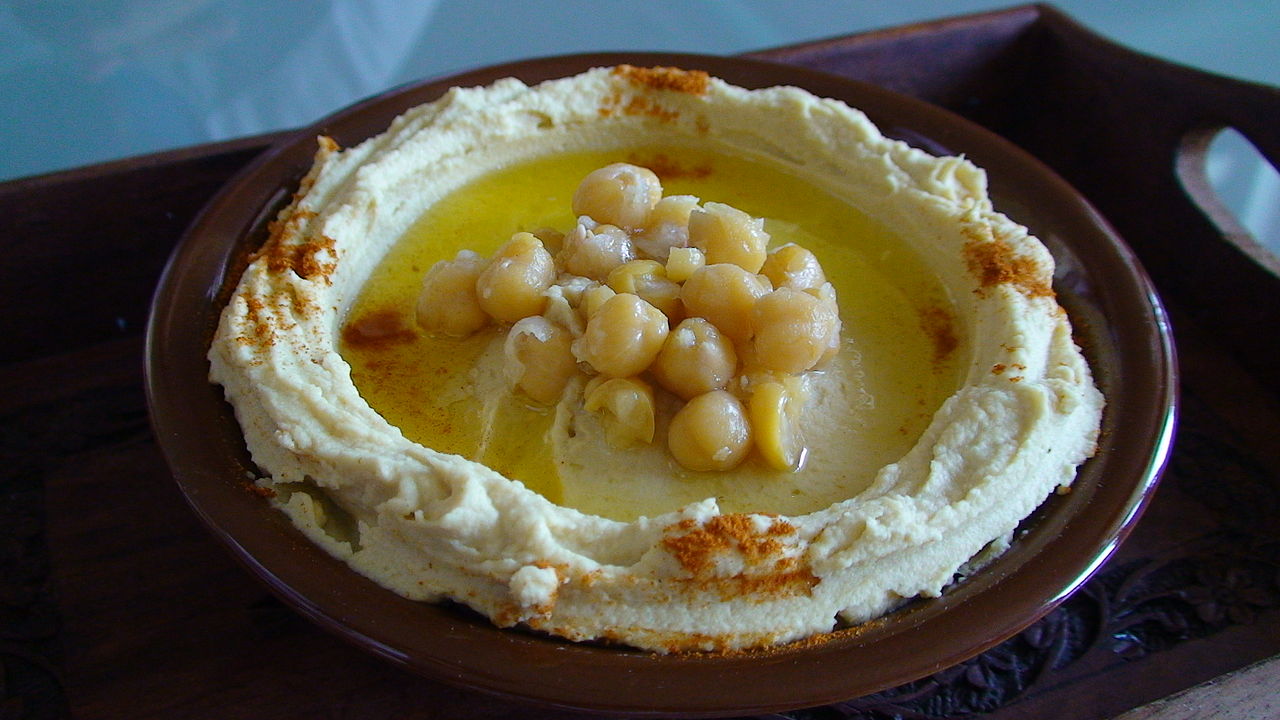 Here is the illustrated step-by-step recipe for making hummus at home:

How about an Israeli Salad Recipe? 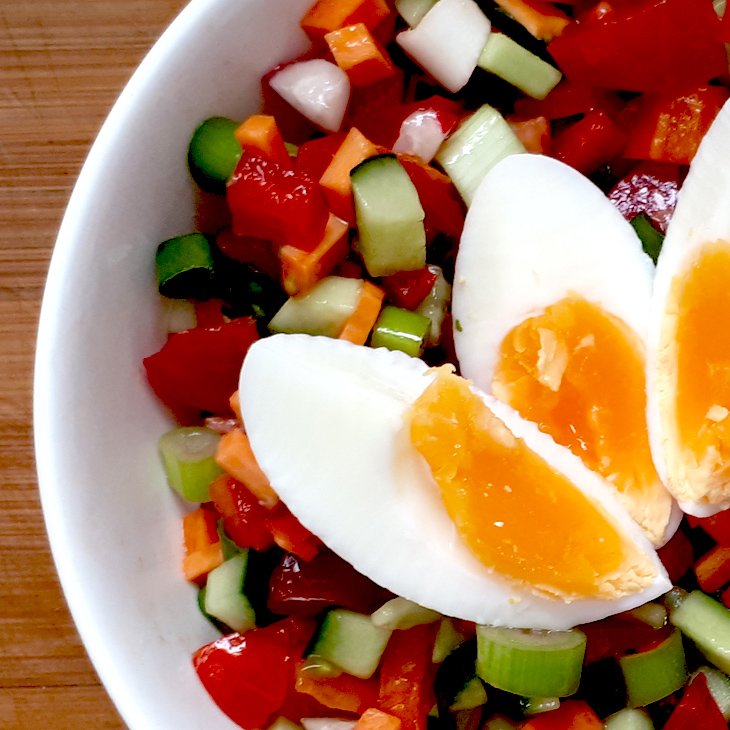 My dad shares lots of grill-experience in the definitive method for perfect roasted eggplants.

Don't miss the recipes at the bottom of the page too!

Find out more about life in Israel: 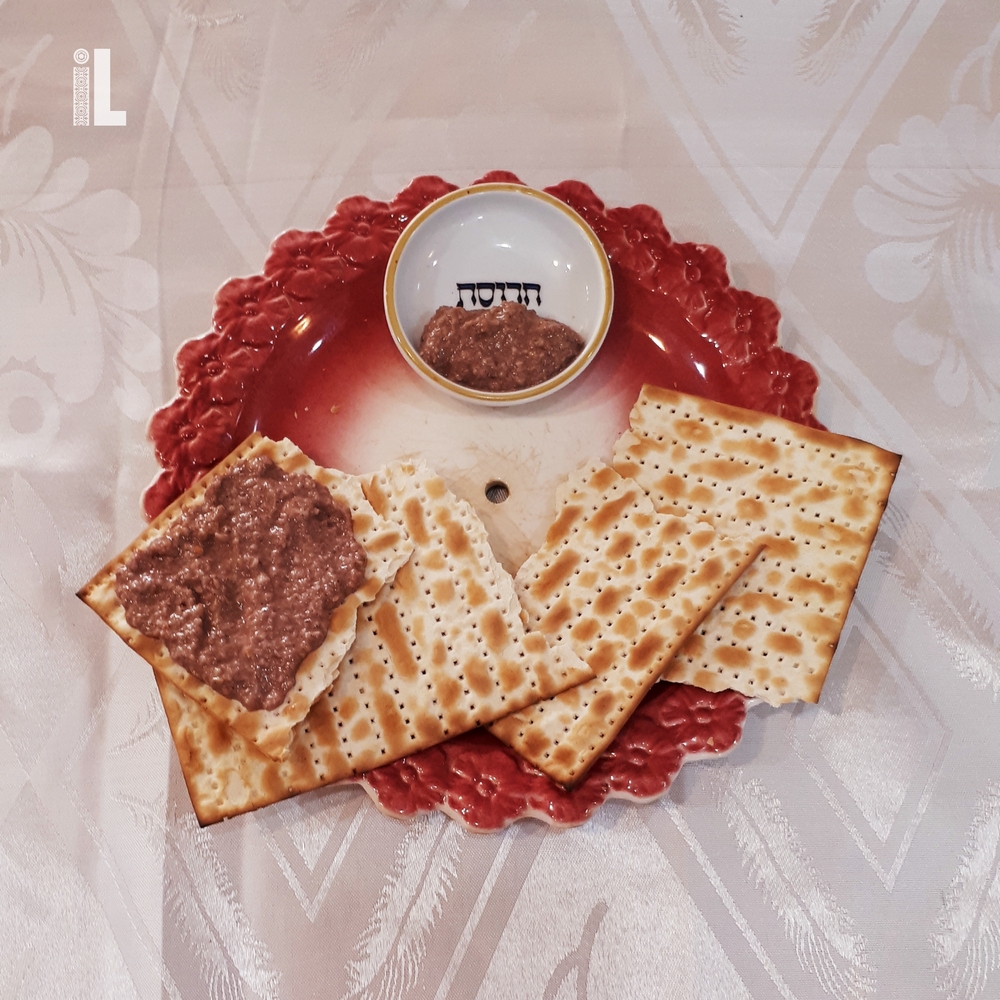 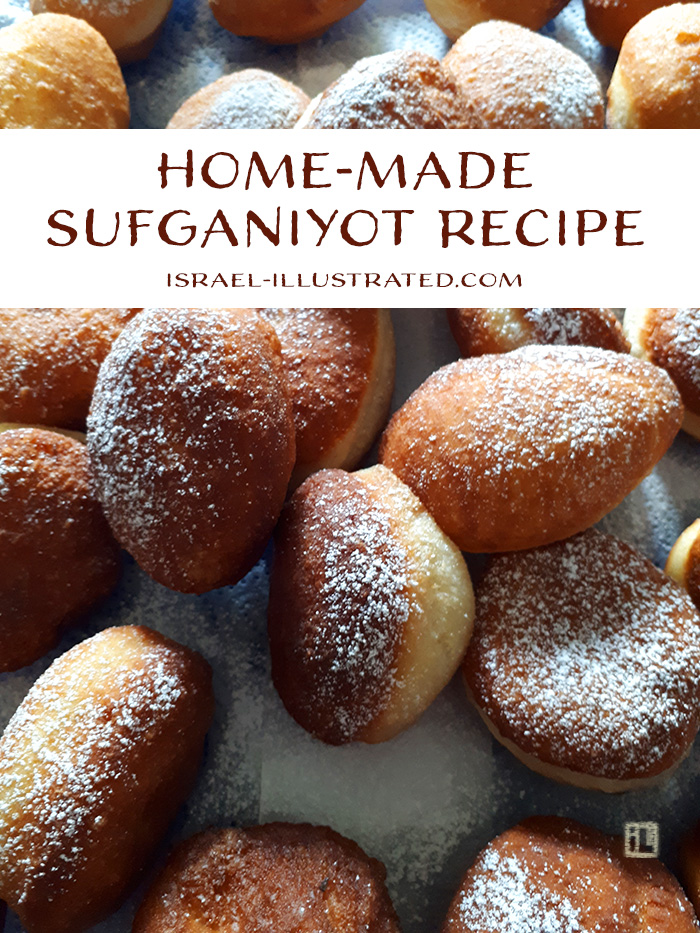 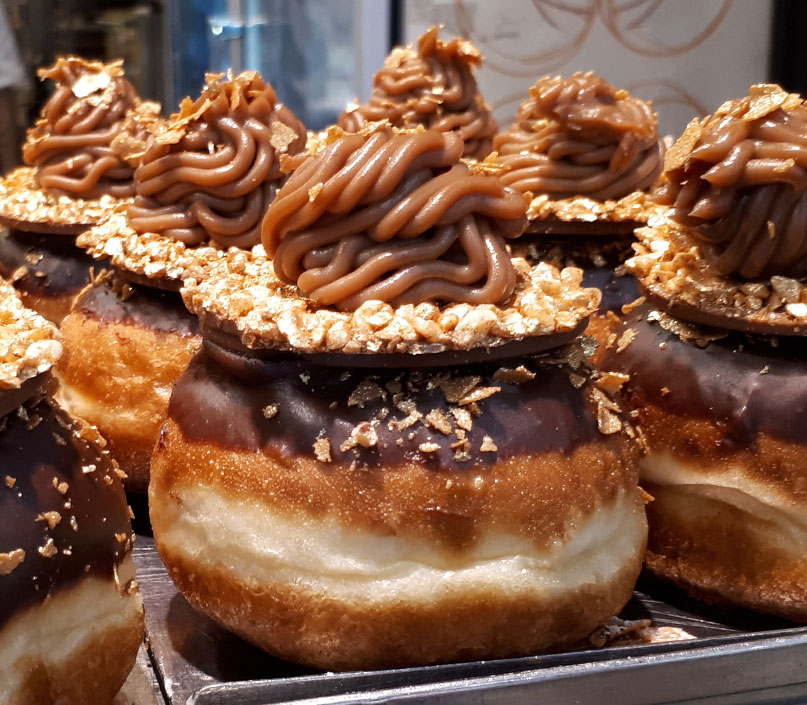 Only on Hanukkah: Roladin's Amazing Sufganiyot

How to make homemade Labane Cheese 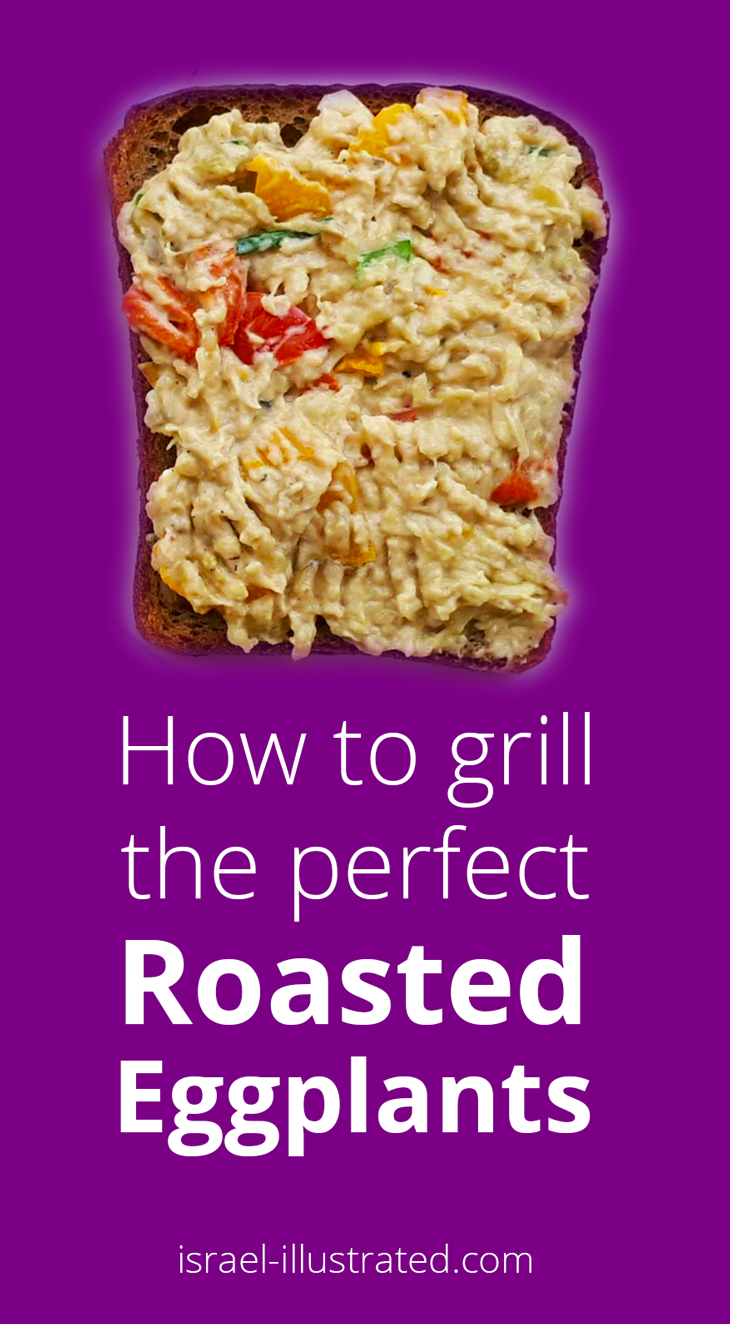